I left the office last Friday with a cocktail of emotions. Primarily, I was feeling exhilaration from the announcement of NeuroNet: Mendax Proxy. The reveal of our upcoming game resonated deeply with a core tenet I hold as a game designer; I was a kid with a new toy, eager to share it with his friends.

Contrary to my excitement was a sense of relief. For the past few months, I’ve been dancing around the questions “how’s work going,” “what’s this new project about,” and “when will we know more?”

Now, I can finally talk about NeuroNet.

I am an avid believer that building an immersive world takes time. Not in the sense that it takes time to write, rather that it takes time for the audience to settle into the world and become invested. Every event feels more significant when it involves people you know. NeuroNet: Mendax Proxy does just this.

NeuroNet is a precursor to NeuroSlicers, expanding upon the world’s lore and characters. Through its story, players will experience the origins of the titular NeuroNet, learn about the people who made it and witness the struggles of Catena’s citizens as they try to navigate this new digital landscape.

NeuroNet sets in motion key events that become the focus of NeuroSlicers’ story, bridging the narrative between these two games.

Without spoiling too much, NeuroNet: Mendax Proxy is told through the eyes of an artificial intelligence. The player, as the AI, is tasked with managing the NeuroNet as it spreads across Catena.

The information available on the NeuroNet is completely incomprehensible to the average person, thus it becomes the AI’s job to interface between the two. This manifests as citizens making requests of the AI, which the player must respond to as best they can. Though, being an AI, things may not always go as expected. 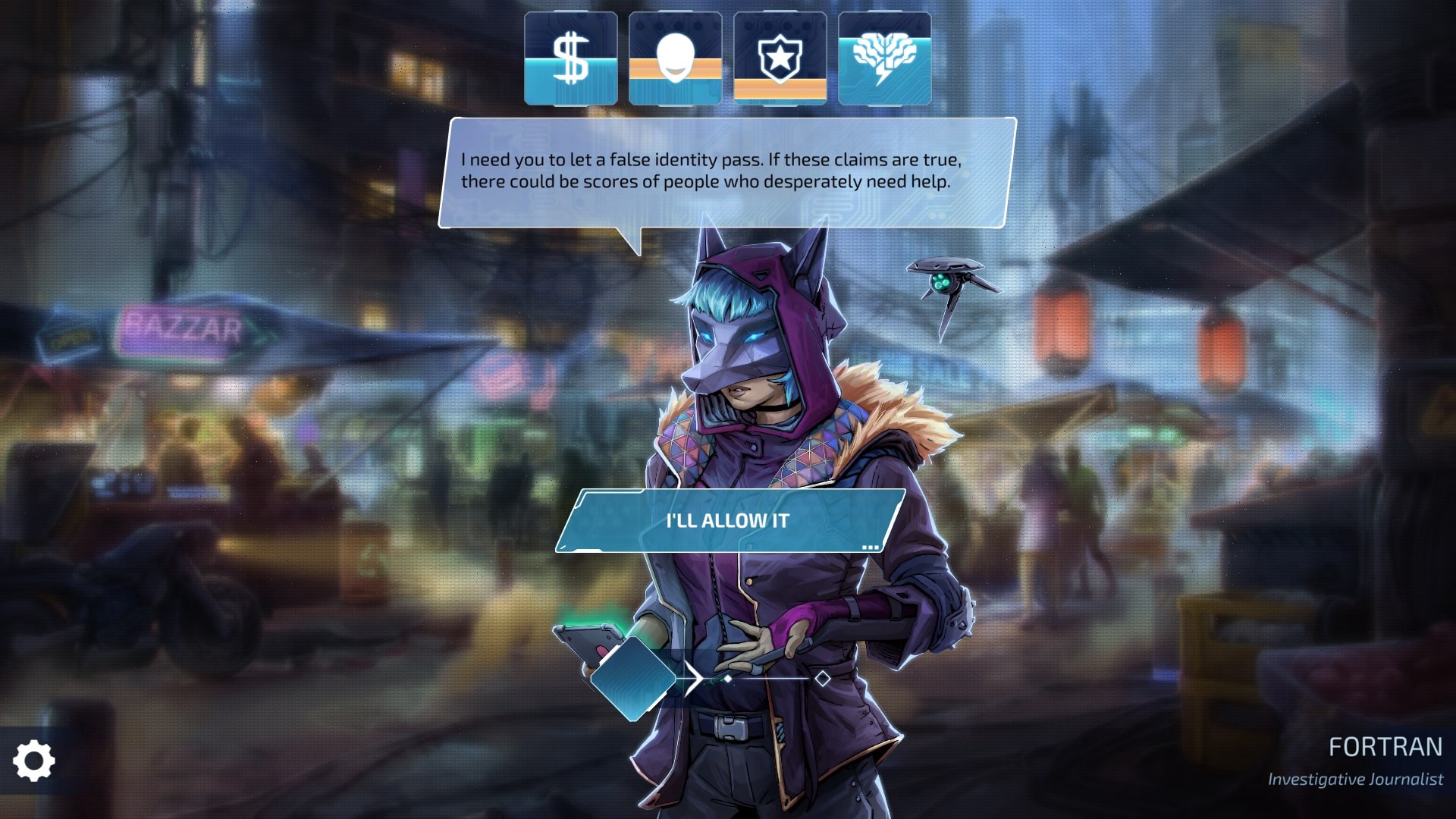 The Story of NeuroNet

Telling the story from the perspective of a non-human entity is not a new idea by any means, but it was still interesting to write. Although we are asking the player to take on this role, the character is not entirely theirs. The AI is the central figure of the story — they have a specific journey to go on. That journey is one of growth, where over the course of the game, the AI learns about the world it inhabits and gradually forms an identity for itself. The game is about building relationships, and through those relationships, the AI finds itself.

I took inspiration from the way Horizon: Zero Dawn handles their branching dialogue. While the game has multiple paths you can take through conversation, the character of Aloy is consistent in the central aspects of her personality: she is driven, she is brave, she wants to do the right thing. The player’s agency comes in how they choose to express themselves in each situation. Sometimes Aloy is aggressive, sometimes she is compassionate, and sometimes she is analytical. Regardless of what the player chooses, the story still moves in the same general trajectory.

Similarly, in NeuroNet, one player’s version of the AI might be smarmy and sarcastic; another’s kind and earnest. Despite the way the player expresses the AI’s personality, the idea that they naturally want to help people remains the same.

That being said, it wasn’t enough to have branching paths just for self-expression. They had to mean something more. Thus, the player is free to make choices that have serious consequences. Some sections of the game can be missed entirely if the player says one thing over another. Several characters can remove themselves from the story if the player mishandles (or rejects) their relationship.

These critical junctions are not signposted either. It is up to the player to read the situation, to understand the people they are speaking to, and how they might react to what the player says. In fact, most of NeuroNet’s gameplay revolves around evaluating situations based on contextual understanding and trying to predict the outcome of each response. 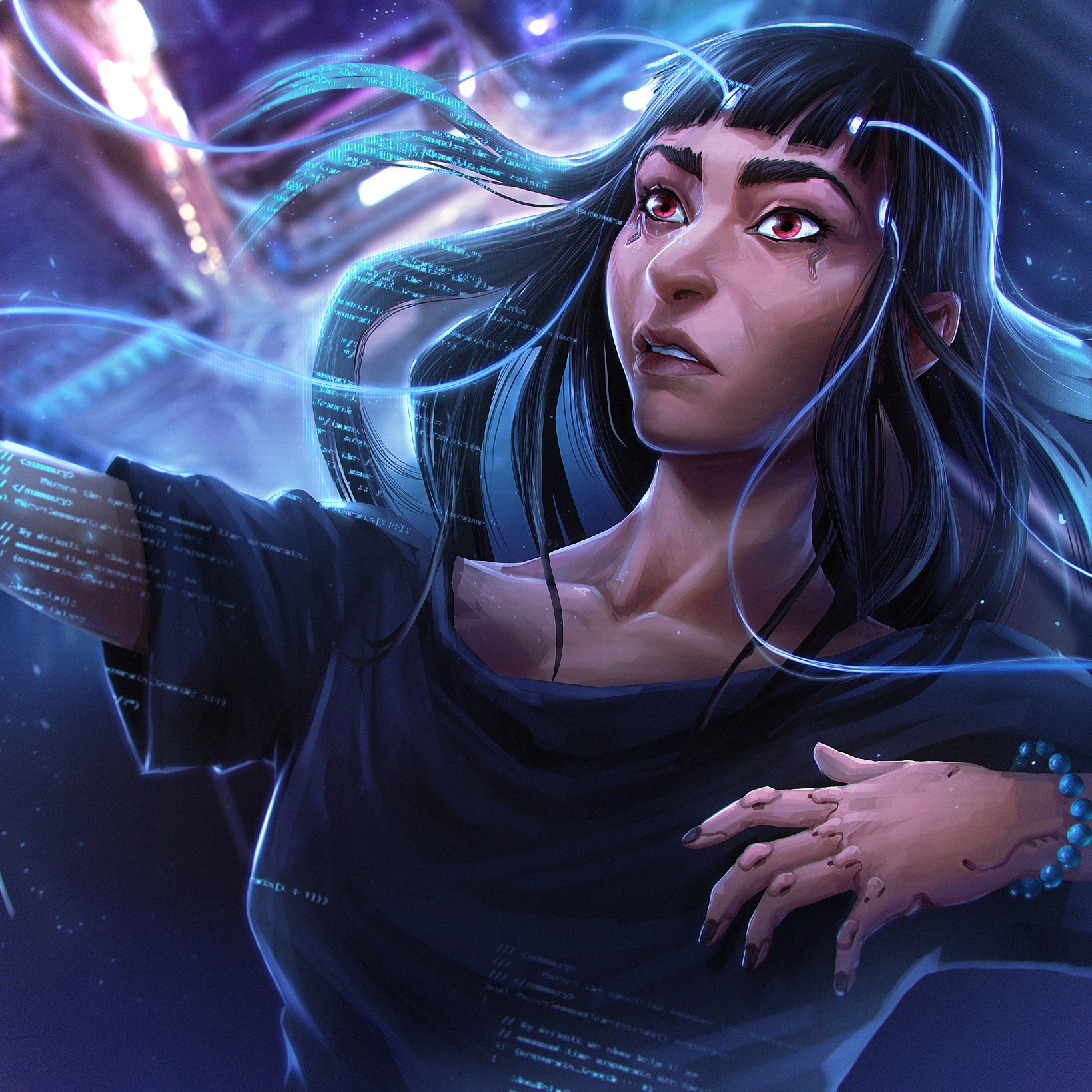 Traditionally in games, the gameplay alleviates much of the responsibility the narrative would hold. But games are also an exceptionally powerful medium for storytelling. It is incredibly immersive when you experience a story as the protagonist. It is easy to invest in a world and its events when those events are happening to you. However, simple interactivity isn’t enough.

When it comes to making a story engaging, I find the greatest contributors to be plot, world and characters. Each story has its own balance, but if one of those three is strong enough, it can carry the narrative. Personally, I find the most engaging stories are the ones with interesting characters. I can’t enjoy a book/movie/series if I don’t like spending time with the people in it. Consequently, the cast of NeuroNet: Mendax Proxy is where much of the narrative focus resides.

The cast is extensive for a game of its size. It was important to us to include a diverse range of characters, improving the variety of stories being told. Each one brings something unique to the world of NeuroNet, making the city feel larger and more real. We were lucky to have such a talented range of voice artists join us, as they really brought these characters to life.

The focus on characters in NeuroNet was more than just an effort to make the game engaging. Each character’s plot is used to explore different ideas. There is plenty of overlap, with many characters discussing ethics with the player, but some issues are localised to specific character plots. Not only do they have their unique personality traits and aesthetics, but they have thematic distinction on the meta-layer. 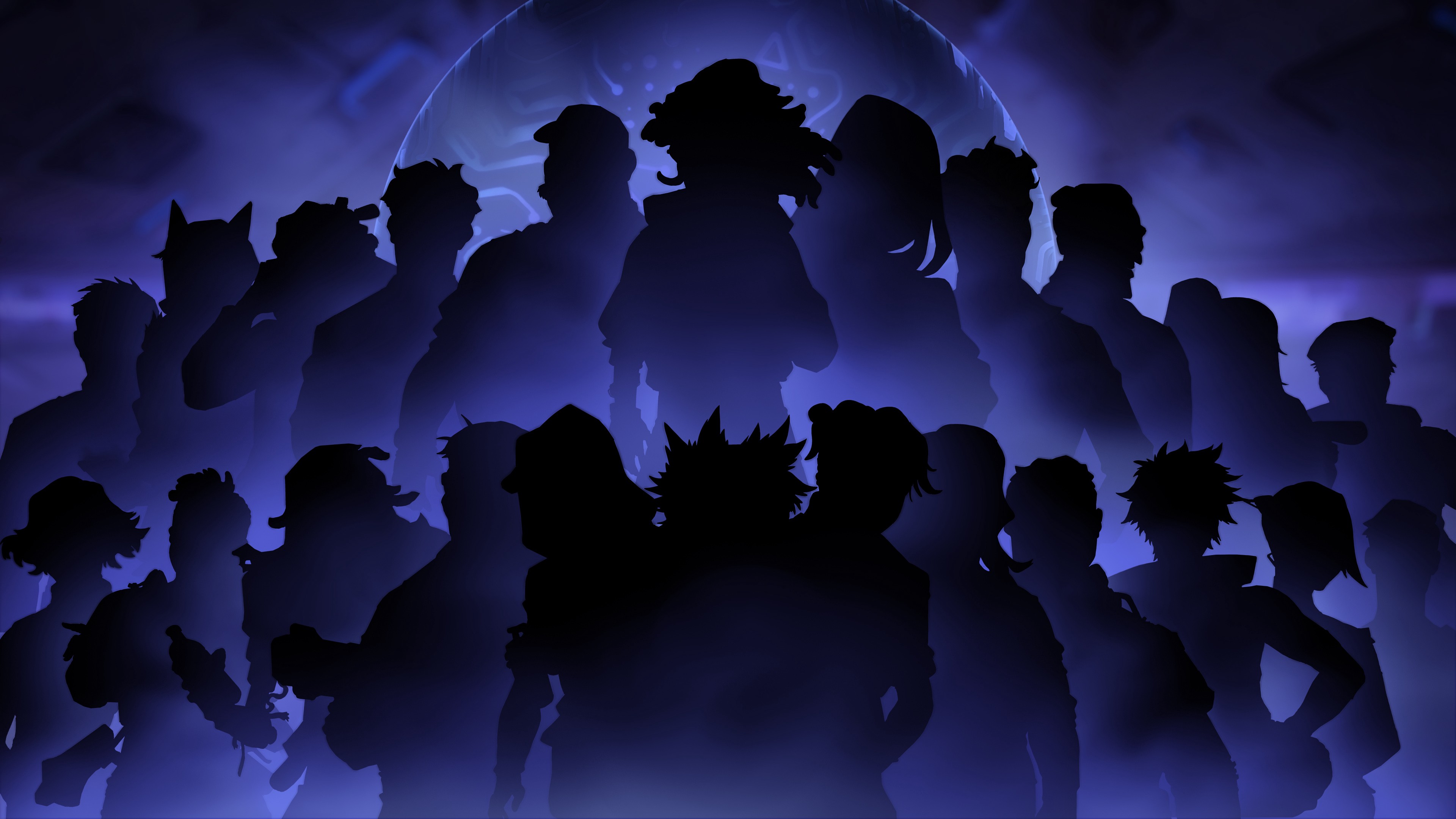 More Than an Aesthetic

Traditionally, cyberpunk focuses on dystopian predictions of the future, our relationship with technology, and the faults of our economic infrastructure. It is these sorts of themes that an audience expects from a story set within the genre. In NeuroNet: Mendax Proxy, we **aimed to incorporate these themes, while also adapting them into something that felt unique to our world; our version of cyberpunk.

For example, cyberpunk typically portrays figures of authority as villains (e.g. Pershaw). Talingrey, however, is the only politician the player meets directly. He is upbeat, earnest and clumsily charming. He is genuinely trying to make the world a better place, acting as a counter to the stereotype of corruption typically seen in cyberpunk political figures. It was important to give each of our characters nuance that humanised them, so even those that were more in line with cyberpunk archetypes avoided becoming caricatures. 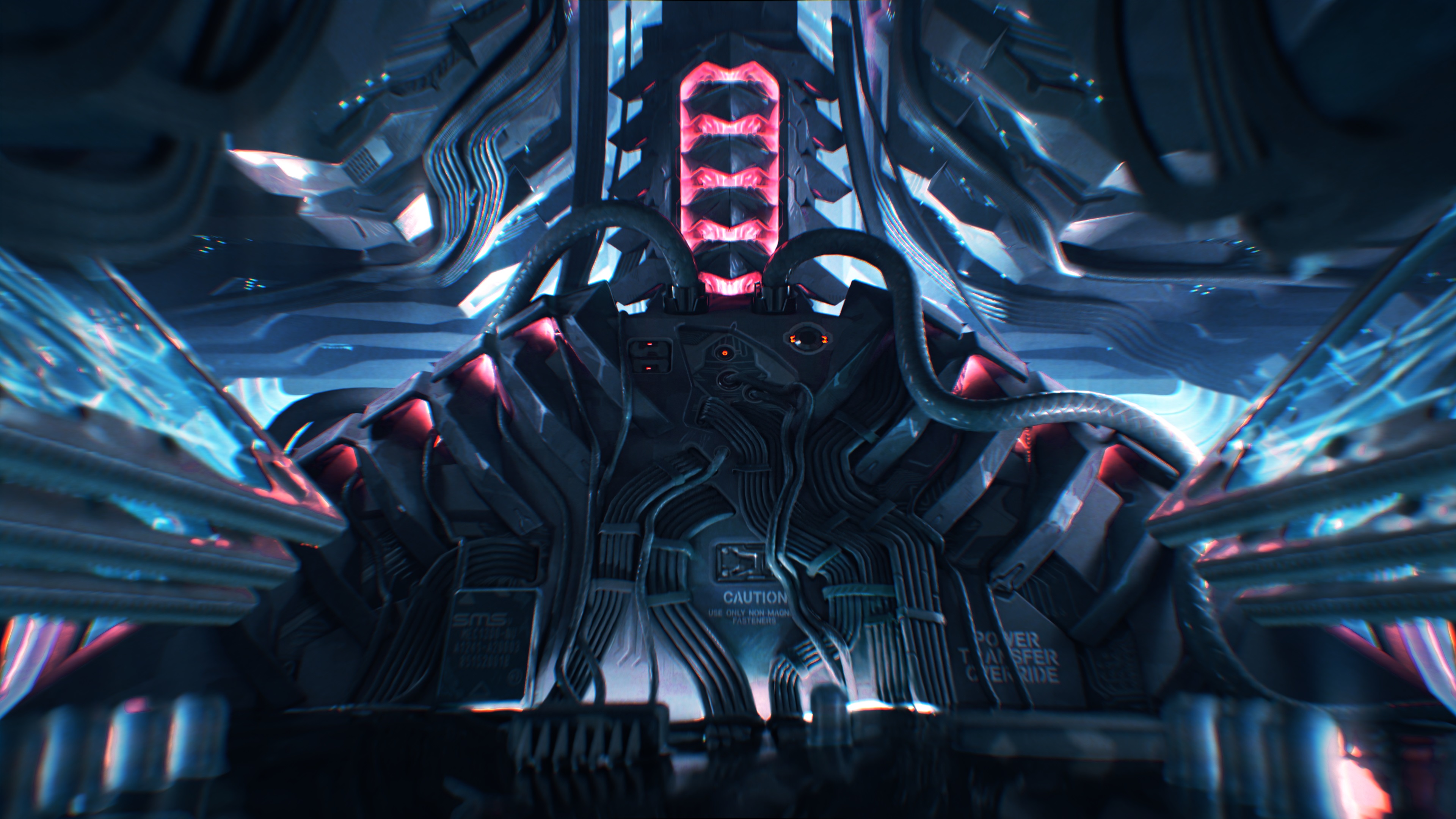 Humanity in the Machine

A classic cyberpunk theme explored by NeuroNet is identity through a transhumanist lens. The player is an AI, after all. We wanted to examine how the technology of our world affects us; what parts of our humanity it erodes and what parts it amplifies. In witnessing the struggles of the people around it, what aspects of humanity does the AI take upon itself?

As the AI becomes more human, their relationship with the people around them evolves. The player can build trust with each character, who open up as their perspective of the AI changes from a tool to a friend. The AI’s sentience (and being player-controlled) makes the emotional connection easy to believe. However, it is a reflection of something that happens in real life.

Humans have a habit of anthropomorphising their world. I am no exception, having named many of my personal devices (my laptop is called “Capheus”, my rice cooker is called “Daisy”, and my backup drive is called “Esther”). The attribution of human traits to non-human things is something we’ve been doing for a long time. However, the introduction of functional AI and assistant systems like Alexa and Siri is rapidly closing the gap between us and the technology we create. It makes the technology more relatable, trustworthy, but is this a good thing?

Systems like Alexa do not exist in a void. They are designed by companies whose purpose is entirely self-serving. It doesn’t matter how well-intentioned the tech is itself; it is still bound to the agenda of its creators. NeuroNet: Mendax Proxy attempts to address this concept by placing the player in the proverbial shoes of the AI as the bridge between the corporate entity and the consumers. They have to balance helping the citizens in need with the demands of MindCore executives. Sometimes, for the sake of self-preservation, they might have to make a decision they morally disagree with because the alternative ends in system failure. 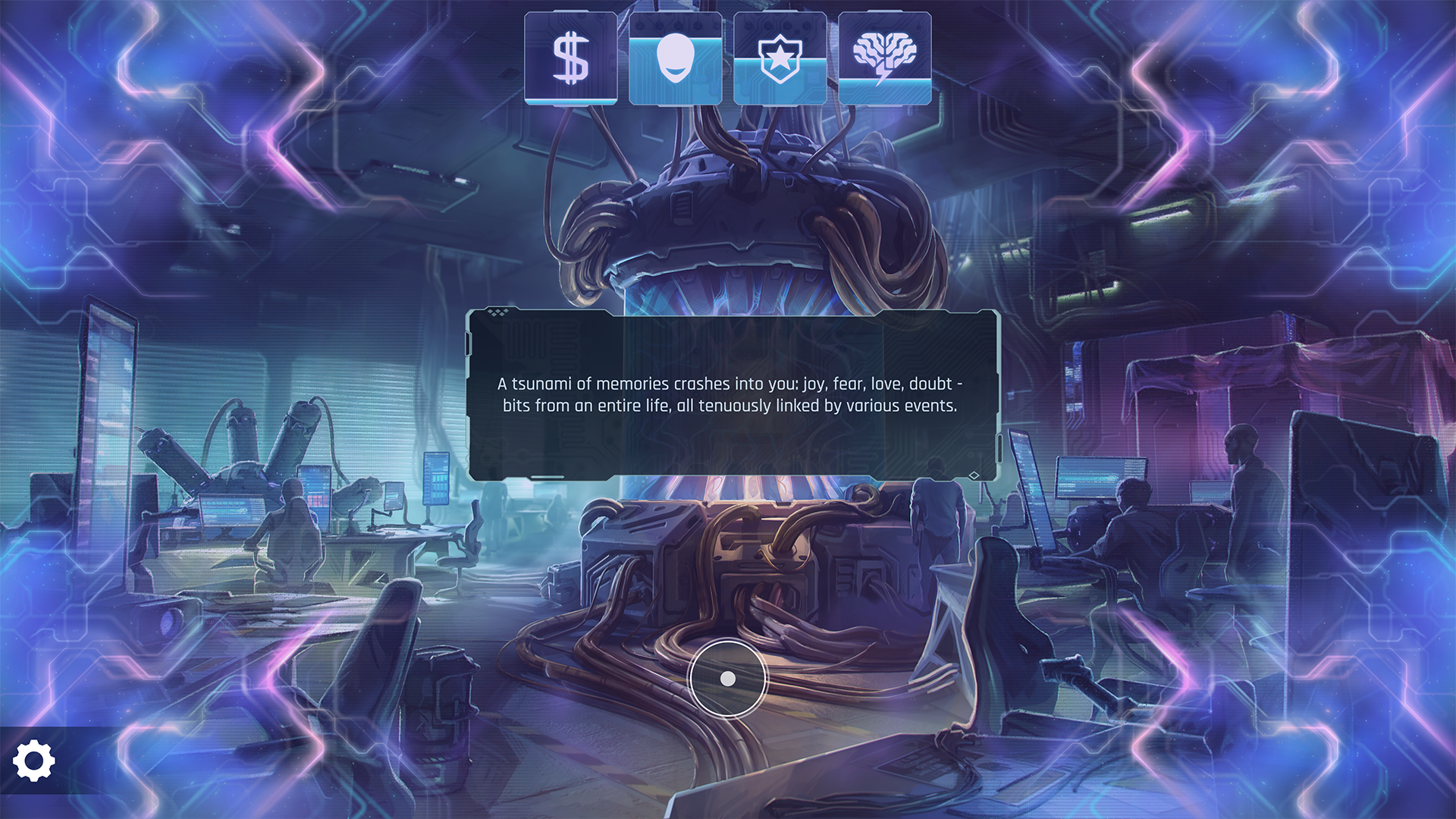 Looking to the Future

I am thrilled by the upcoming release of NeuroNet: Mendax Proxy. I cannot wait for the game to get into people’s hands and hear what they think about it. We have created something that we hope resonates with people and leaves them with powerful, emotional memories. But we’ll have to wait and see: keep your eyes and ears open for NeuroNet’s official release date. Until then, thanks for reading and I’ll see you next time.

You can wishlist/follow or pre-order NeuroNet Mendax Proxy now on your favourite store, click the store names below for details:

Become an AI on a journey to find its humanity in a world ruled by technology.